KGs March on to Cheltenham-Dubai 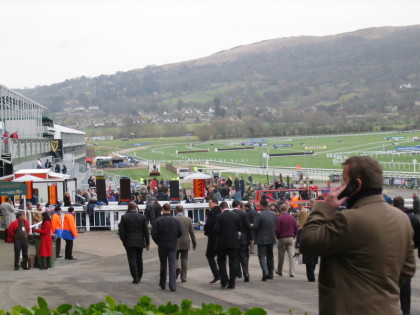 Cheltenham, England. - In a “Tale of Two Race Tracks,” an international cast of racing enthusiasts travel between diverse cultures and climates, seeking camaraderie while attempting to knock the “Dickens” out of bet takers at two of the world’s best meetings.

In their eighth traveling adventure, the KGs (Known Gamblers), are hoping that the month of March comes both in and out like a lion, leaving the lambs, in this case the bookmakers, as road kill. The month long foray kicks off at the planet’s premier jump meeting - the Cheltenham Festival.

Buoyed by his strong showing at the betting windows two years ago at Royal Ascot and the Irish Derby, the patron saint of the KGs, Murray Dwyer, is the architect of this grandiloquent scheme to ream, steam and dry clean bookmakers at the National Hunt meeting over four days.

The KG adventures, which take place biannually, have evolved from a mere weekend of racing to a month long extravaganza. After Cheltenham, the KGs will venture into the Welsh and English countryside in pursuit of more winners and liquid refreshment at various race meetings and pubs. If history is a guide, hard drinking and eager story telling will merge seamlessly with astute handicapping and vigorous gambling.

For the second chapter of a “Tale of Two Race Tracks” there’s an (Oliver) twist of venue to the warmer climes of Dubai where the week will be highlighted by the richest day in horse racing at The World Cup. The culturally conservative United Arab Emirates is a location that is a little out of character for the KGs, considering their daily life habits. But in pursuit of the very finest racing, sacrifices have been made. (It has been rumored that a man can get a pint and punt in the Emirate, although not officially!)

Interestingly, the KG Club was foaled from tragedy 10 years ago when Walt Tendler, a San Diego based biotech CFO, re-evaluated his life following the premature death of a friend. While such earnest self-examination might lead some men to spend more time with their spouse, enjoy a few more sunsets or stop to smell the daffodils, Tendler decided it was an opportunity to pursue his life’s passions, travel and horse racing.

Tendler made a list of races he wanted to see and racetracks he wanted to visit. Not surprisingly, it wasn’t difficult to find a dozen other men who would rather see the sight of a longshot than sight see, by a longshot, and the club was formed. Previous KG trips have included sojourns to Royal Ascot, the Melbourne Cup, the Preakness Stakes, the Irish Derby and the Breeders’ Cup. The members decided to call themselves the KGs, after the police term that American detectives use for Known Gamblers.

Australians Murray Dwyer and Mel “Each Way” Hopwood, Canadian Dave Taylor and American ex-pat Roxy Roxborough joined Tendler as charter members of the club. Even in a country where the average Aussie spends more money on gambling than he does for food, Dwyer is a betting and handicapping legend. Hopwood is the man they couldn’t root, shoot or electrocute. Taylor, an electrician turned horseplayer, once was faced with the dilemma of having time to grab only one item before fleeing a burning apartment building. He emerged from the fiery edifice with a copy of Daily Racing Form. Roxborough, a former Las Vegas oddsmaker, now lives in Thailand.

This year’s lineup includes residents from Australia, USA, Canada, Thailand, Ireland and England. Often KGs are joined by other salubrious characters and this adventure is no exception. Other members include Englishman Terry Clark, a race author, handicapper and scholar; Americans Mike Knapp, a race betting executive, and Steve Anderson, a racing journalist and 10 time Cheltenham Festival veteran; Irishman Pat Flanagan, a betting exchange executive; and  Aussies Howard Powell, a racing administrator that should know better than to join this crowd, and Basil Teasey, a retired diplomat.